3 EASY WAYS TO CREATE A MONSTER FOR YOUR STORY

( It's been a long time since I last posted on this blog. I've given some thought to posting once again in 2014, but a recent forum thread gave me the inspiration to write this post. ) 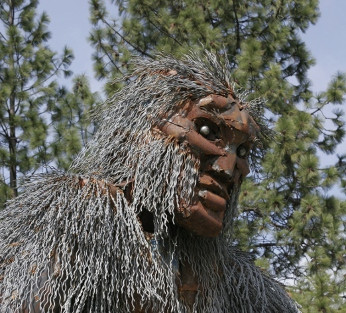 The world is full of stories where man battles a savage beast. But in fantasy and horror those creatures are often more than what mother nature intended and the hero is forced to struggle against a creature of supernatural origins. Sometimes though, coming up with just such creatures cause angst in many writers. Here are three easy ways to generate a creature worthy of a hero for the ages.

The first method is rather quite simple. Give the creature a dose of gigantism. Anything becomes dangerous when it’s much larger than your hero. Bilbo Baggins struggled against giant spiders, Captin Nemo fought against giant squids, and Jack had trouble once he climbed a giant beanstalk and ran into giant men. Even a sweet, little rabbit will become dangerous when it’s the size of a tank.

Most creatures once turned into giants will have their strength multiplied. And if the animal has special attack weapons, they become even more dangerous--Watch out for that giant lobster!

Another age old method to create a cool monster is to take a beast in your left hand and a beast in your right--and smash them together. The resulting beast will have a unique appearance and way of acting based on how you want to arrange the parts:

a. head and body

A minotaur is just a man’s body with a bull’s head attached to it. The Egyptians believed in gods who had a man’s body and another creature’s head. Anubis had a jackal’s head, Sekhemet the head of a lion, Horus the head of a bird.

A merged humanoid is a creature that has a man’s body (head, hands, legs, torso), but they’re in animal form. A good example of this is the werewolf. When the full moon rises the werewolf comes out to hunt and the man completely gives way to the beast. OWWWWWWWWWWW!

d. half and half (no you don’t want to put this in your coffee)

One thing you may want to consider when you combine a creature with a human in the above methods is how humanized that creature becomes. A creature that has a man’s body, or a man’s upper half, or a is just a man with a creature’s unique gift is that the new creature may still act in a human manner. The creature may have language, culture, cities, intellect, tribes, and customs. If so, consider how the animal part affects that group. Think about how the combination changes the man.

There are a few creatures that are a hodgepodge of beast when it comes to how they’re thrown together. They combine more than two creatures into one. For example the sphinx has a man’s head, a lion’s body, and an eagle’s wings. When you want to create such a patchwork beast consider these parts of its body: head, body or torso, limbs (arms and/or legs), and maybe a tail. Combine the parts together and you have something no one would want to meet in a dark alley.